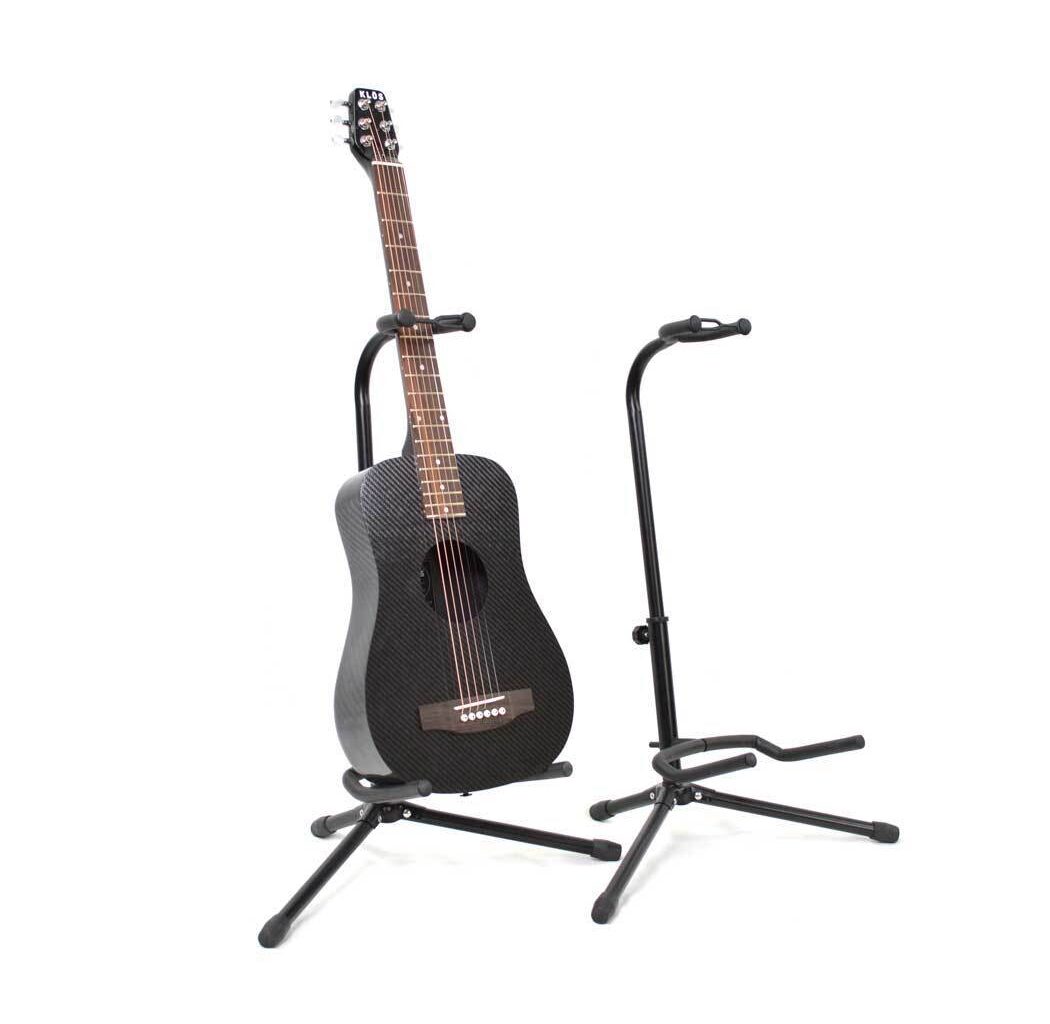 5 Reasons You Need A Guitar Stand

You know that feeling of having a new guitar and wanting your hands all over it all the time? I understand it too. But wanting your guitar at arms reach all the time does not mean you have to leave the guitar lying on the floor, bed or couch, or leaning against the wall or different objects in the room. 😢That is totally a bad idea because if you accidentally bump into your guitar, it might slam on the ground resulting in various levels of damage to the guitar or its components. There’s a solution where you can have your guitar so close and yet so safe; it’s called a GUITAR STAND👏. Let’s explore 5 different reasons why every guitar owner needs a guitar stand/stands as the case may be.

#1 Reason – Protection Of Your Guitar

Guitar stands have something clearly unique about them, its the fact that they are designed in a way that prevents the guitar from falling out by making it sit at an angle. The bottom part of the stand that has two pointed parts on each side, allows the guitar to sit comfortably and securely. So even if you hit the guitar accidentally as you’re passing by, it won’t fall out from the stand. Different stands have different features, it all depends on the one you’re choosing. Some have hooks that hold in the guitar and keeps it at a fixed spot and stops it from shaking or moving about while others come with just the basic ‘holding’ feature. However the guitar stand may be, using one is much safer👍 than not using one. Don’t ever lean your guitar against the wall or against the back of the couch or against any other furniture because it’s bound to fall and slip often and when it does, it damages the guitar bit by bit, leaning it against an object also makes the guitar look worn out and faded on the bottom where it rests on the floor, and on the headstock where it leans against the object(s). Now, you might say “but my guitar has a bag, I’ll just put it in there”. Yes, your guitar has a bag, but even guitar bags do not have enough softness or padding to protect your guitar from damaging. Guitar stands are well built, they will hold your guitar in place and not allow it fall off, besides, the parts of the stand where the guitar touches it are soft and padded too, so you can be assured of 100 percent protection.

The old adage that says ‘out of sight, out of mind’ is very much true even about you and your guitar. Practicing is the most important way to improve as a guitarist. The more often you see your guitar waiting patiently for you to pick it up, the more likely you are to actually pick it up and practice. Its easier to pick up your guitar when its on a stand as soon as you hear a tune in your head and quickly want to bring it to life, than just waiting and memorizing it till you eventually pick up the guitar (whenever that would be), and you might even have forgotten it by then. If you store your guitar away somewhere; in a bag, in a cupboard or under a bed, you’re not going to be reminded of it often enough to pick it up and start practicing. Besides, the effort you put in to finding the guitar or bringing it out from wherever it is, cleaning it and setting up will be enough to drain you physically even before you start playing😫. But its different when your guitar is on a stand, it’s easier to access it, all it takes is just for you to ‘unhook’ it (if it has a hook), get it out and play! Humans are very busy people, we might not even get enough practice time for each day, so the easier you can access your guitar daily, the better and more productive you’ll become. Another cool thing about using a guitar stand is that it keeps your guitar untouched and still in tune for you to pick it up just the same way you left it, unlike your guitar bags that would actually distune the guitar, causing you to retune all over again every single time (this can be extremely frustrating😡).

Its a thing of pride and joy to be in possession of an instrument as beautiful as a guitar🎸. Some of us may have really cool vintage guitars with great histories, others may just be the basic electric or acoustic guitars but with brilliant colours and I know you’d love to show it off to your guests or friends that come around😉 Guitar stands have got you covered. If you have several guitars but you feel like guitar racks look too cumbersome and clustered, you can use several guitar stands and space them apart from each other to give it that neat and tidy look.

If you’re a guitarist that gets lots of invites to gigs, shows and events, and uses more than one guitar per event, guitar stands are just your best bet because you definitely do not want to start unpacking or removing your different guitars from their bags while on stage, that would be capital letter EMBARRASSING!!! If you have an assistant, you can have them set up your guitars on stage just before you go up. Now how about those practicing or playing at home? You may have different guitars for different genres of music, for instance, you may have a Fender Stratocaster or Gibson Flying V for rock, an Epiphone Joe Pass Emperor II for jazz and a Fender Vintera ’70s Stratocaster for blues, what do you do when in between practice you want to switch from scoring a jazz piece to recording some cool blues chords that just pops into your head? Simple! Drop one guitar and fetch another one from your GUITAR STAND without having to shuffle between bags and underneath beds (sounds so cool right?😎)

#5 Reason – HELPS TO PREVENT STRESS ON YOUR GUITAR

As humans, when stress is applied on our necks or any other part of our bodies, it deforms, same with the guitar. Strings apply a lot of pressure on the neck of the guitar and the neck was created to counter that pressure. Whenever you lean a guitar against the wall or any other object, pressure is applied on the neck of the guitar, the neck tries to contain all the weight of the strings and also the weight of the entire guitar, resulting in critical neck deformation.  When you use a guitar stand however, the guitar touches the stand at the top (where the neck is), it gives it a balance and reduces the stress on the neck, therefore giving your guitar a better chance at survival and longevity.

Guitar stands are very affordable, they do not consume so much space either, and they will help keep your guitars safe from harm. Even if you cannot afford a guitar stand at the moment, there are other DIY ways of improvisation and creation, just check them out online and you’re good to go. There are various reasons why guitar stands are needed. If you know any others, let us know in the comment section below👇👇👇

10 Awesome Ways To Promote Your Social Media As A Musician

6 Things To Consider When Buying A Looper Pedal