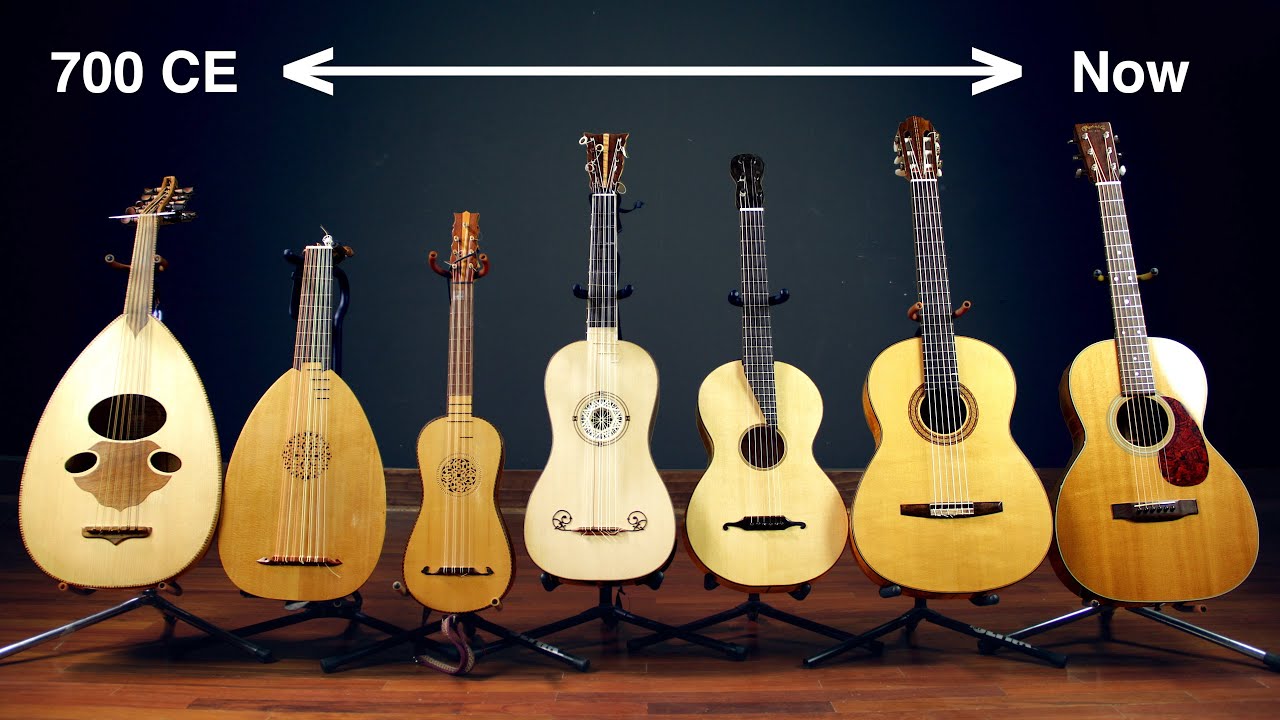 The History Of Guitar Explained

extensive round back) while some believe it comes from the Kithara (ancient Greek – a seven-stringed folk instrument); it’s mystery is still unknown. It falls under the classification of string instruments. It is a fretted instrument that usually has six strings, it is played with both hands; one hand holds down the instrument close to the player’s body and strums or picks the strings either with the fingers or with a tool called a pick or plectrum while the other hand simultaneously presses the stings on the fretboard. The guitar is a chordophone instrument; this means that it produces its sound when a string is vibrated and stretched across two points.

shaped like a guitar which had doubled strings of 5 or 6), the gittern also called  guiterre (France) or chitarra (Italy) or guiterna (Spain) or quintern (Germany); this was also a small round back stringed instrument, their strings were made with gut and they mostly had not more than 8 frets. In the 16th century, the vihuela was tuned C-F-A-D; the E-A-D-G-B-E tuning appeared in the late 18th century and is still used in tuning till date.

Every part of the guitar underwent some series of evolution; the tuning pegs were replaced with metal screws, the gut frets that were usually tied on in the earlier days were replaced with ivory or metal frets by the 18th century, the 8 frets were also replaced with 10 frets and later 12. By the early 19th century, the modern guitar as we know it now began to take shape, the body of the guitar was made wider, the belly was tinier and had a curved waist (which gave it that hourglass shape),it did not have much depth but had a very thin soundboard. Most of the transformation that was made on the guitar by the 19th century was majorly the work of Antonio Torres.

with nylon strings. Other types of modern day guitars are the acoustic guitar which uses steel strings, the Hawaiian guitar and the electric guitar.

Orville Gibson created the archtop guitars in the late 19th century which  were made like cellos, had a moveable bridge, oval sound holes, arched top and back and an increased volume and tone. These flat top guitars quickly became popular among jazz and country musicians. In the 1920’s, Gibson was joined by Lloyd Loar and they fine-tuned the archtop guitar, making it especially suitable for jazz music.

The electric guitar came into existence in the late 1920’s when pickups were attached to Hawaiian guitars but it did not make so much popularity until Gibson introduced the ES150 model in 1936. At this time, several other guitar makers began working on electric guitars from the old model of the instruments; some of who are Leo Fender, Les Paul, O.W Appleton and Paul Bigsby; there are even controversies as to who first made the solid body electric guitar, but who cares?🤷‍♀️ Guitars have gone through stages and series of evolution and it’s amazing that we have them today, they can be played in almost every genre of music like country, blues, pop, metal, funk, folk, soul, rock, jazz, bluegrass, reggae, flamenco etc!

Who knows whether there’s still any further pattern of guitar evolution that has not been discovered yet.🤷‍♀️…fingers crossed🤞🏼

How To Write Your First Song

Read More
NNews
Amazing Grace (2018) Aretha Franklin, one of the greatest gospel musicians to have ever lived, was the main…
Read More
NNews
Whenever we use the term “channel” anywhere in this article, we are simply referring to YouTube in particular,…
Read More
NNews
Hey! It’s Easter season, another season of love and sharing. We all know that music lovers and musicians…
Read More
NNews
Sir Victor Uwaifo Victor Efosa Uwaifo, also known as ‘guitar boy’ was born on the 1st of March…
Read More
NNews
Welcome to the age of technology, where almost anything and everything “musical” can be achieved just by the…
Read More
NNews
It is almost impossible to be a regular white collar job holder and still be a full-time guitarist…