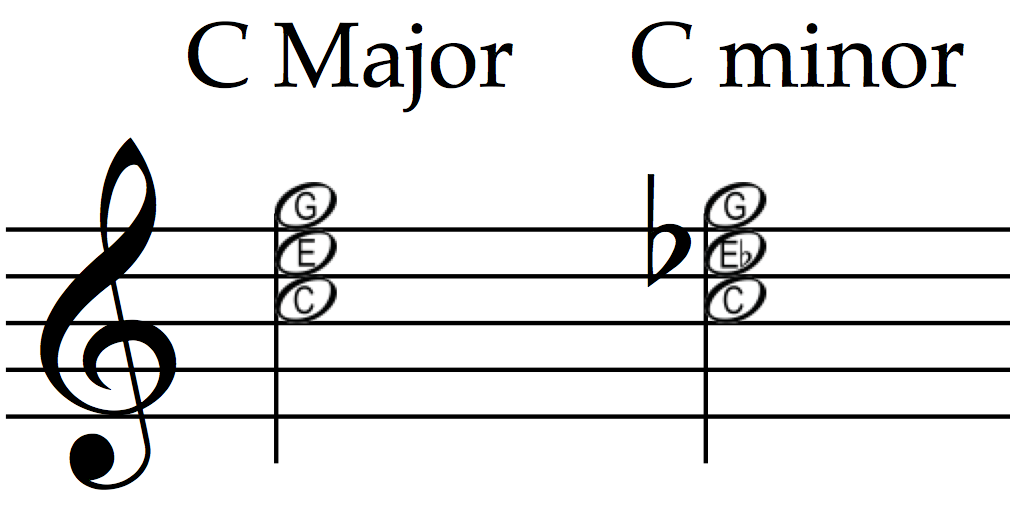 What Makes A Chord Major or Minor?

A major chord is a chord that comprises of three notes of a major scale: a root note, a major third and a perfect fifth. These three notes are called a triad. A major chord is the basic chord every beginner would likely learn first because they mostly make up the core of a numerous amount of songs we have today, and it is best understood first because it forms the ground on which the minor chord is built upon. The example below is a C major scale

According to what we have defined above, the notes of a C major chord would be C (the root note), E (the major third) and G (the perfect fifth).

A minor chord is a chord that also comprises of three notes of a minor scale: a root note, a minor third and a major fifth. See what happened there? Yes, you got it right! When constructing a minor scale, the note you should concentrate on or consider most is the third note, there is usually a slight change; it is moved by a half fret down the fretboard, other notes basically remain the same. Let us still use the C major scale as an example and make a C minor chord out of it

Now, we know that the C major chord is C, E, G. To make a C minor chord, simply move the 3rd note (E) by half a step below the fretboard which gives you what is known as a flat or lowered and is represented by “♭”. We now have:

Another way to tell if a chord is major or minor when it is written down in a sheet of music is the indication of a lower case ‘m’ to tell you that the note is minor. An A major chord for instance, is often written as ‘Amaj’ while an A minor chord is always written as ‘Am’. In most cases where you have ‘A’ without anything before or after it, note that it is an A major chord, a major chord may or may not have anything else written close to it, but a minor chord would ALWAYS be differentiated by a ‘m’.

Now that we have a grip of what the major and minor chords look like, we can say that the basic summary is that what basically determines whether a chord is major or minor is the third interval of the note and how it appears when written down in a music sheet.