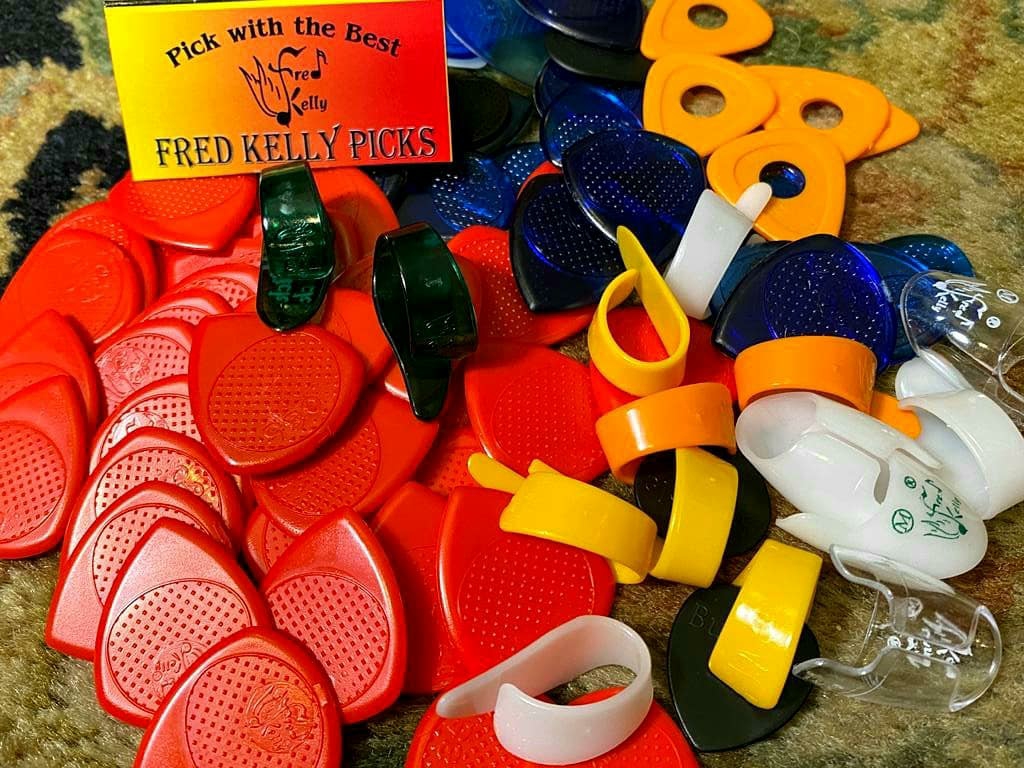 What Is A Guitar Pick + FAQs About Picks

What is a guitar pick?

A guitar pick, also called a plectrum, is a small flat accessory which often comes in the shape of an isosceles triangle (where only two sides of the triangle have the same length) or an equilateral triangle (where all three sides of the triangle have the same length) with rounded or sometimes sharp tips. A guitar pick is used to pick single notes or strum chords on a guitar and it is a useful tool that has been around for thousands of years. In the past, feather quills were used to pluck stringed instruments before tortoise shells became the popularly used material for making plectrums in the 19th century. Other materials like stone, ivory, wood, bone and metal were used much later as choice materials for making picks. These days, the materials used in making picks have been replaced with plastic, wood, nylon, glass, metal, carbon fiber, felt or stone which comes in different sizes, shapes, gauges, colors and textures (which we would talk about later).

Why use a pick?

Why use a pick when you can just use your thumb and fingers? There is really nothing wrong with using your thumb and fingers but you’ll realize that a pick makes you faster in your picking as well as teaches you more techniques apart from the fingerpicking technique which you use your fingers to play (as the name implies – fingerpicking). Playing with a pick gives you a brighter sound and a warm tone especially when you’re playing lead guitar lines or improvising.

Who should use a pick?

Some guitar tutors say that guitarists must get to a certain level before they can be “allowed” to use a pick. I say NO to that. Anyone who just starts learning the guitar, even if you are just few days in, should be introduced to what a pick is, and what using it feels like. I think every guitarist should learn the ability to play the guitar with a pick and without a pick; it enhances your versatility and prevents bad sores on your fingers as a result of the harsh steel strings.

What kind of strings can a pick be used on?

The best category of strings that a pick can be used on are steel strings, classical guitars have nylon strings and are played using fingerpicking technique, but yes, it is feasible for them to be strummed with a pick (even though they have no business with picks). Bear in mind though, that you should be very careful when using a pick on a classical guitar. Because the standard way to play a nylon-stringed classical guitar is with the fingers, they do not come with pickguards, therefore the picks can seriously damage the body of the guitar when used frequently (a pickguard is that thin plastic sheet below the soundhole around the area where your downward strum ends).

How do you hold a pick?

A pick is held lightly between the index finger and thumb but firmly in a way that it does not drop or fall into the sound hole of your acoustic guitar. Grip too hard and you may end up with painful fingers and wrists, grip too lightly and you may not produce the required sound from your guitar strings plus it may fly right out of your fingers. To properly hold a pick;
– Roll a fist
– Bring out your thumb and index finger from your fist ball (while still keeping the remaining three fingers closed)
– Hold the pick between the pad of your thumb and side of your index finger. Let your fingers cover the pick just enough to let the pointed part of the pick stick out, don’t cover too much and don’t expose too much, hold it firmly but not too tightly. Some picks come with a carved inner portion to specify just the right amount to be held on to.

Picks vary in thickness. For beginners, it is best to start off with thinner picks because they are lighter and produce brighter tones than thicker picks which produce darker tones. Beginners practice more of strumming and playing basic chords, thinner picks would fit that playing style perfectly; thicker strings need more skill and control to use, which may be a bit stressful for beginners. However, thinner picks work better for strumming and playing rhythm guitar while thicker picks work better for playing lead guitar. The thickness of picks ranges from 0.38mm being the thinner types to 1.5mm being the thicker types. Nevertheless, there are picks that measure as far as 3.0mm in thickness! The heavier the pick, the more control it offers. Your string gauge should also be a determinant when choosing your picks; heavier picks should be used with heavier strings

Pssst! Find out all about string gauge here

The several thickness of picks you may find on guitar picks are:

These sizes vary from manufacturer to manufacturer, for instance, company A’s medium pick may vary from 0.50mm to 0.80mm so it is advisable to check the actual thickness in millimeters before buying a pick.

Some picks have very smooth surfaces on both sides, but some others come with rough textures on each flat side, this texture is what creates friction and tightens the grip between the pick and your fingers; the more the texture on a pick, the more friction and grip it has when you hold it and the more firmly it would stay in your hand without sliding off.

Picks come in different sizes; the sizes have nothing to do with the thickness; a pick can be wide but still thin, same way a pick can be small but still thick. The largeness or wideness of your preferred pick should depend on the size of hands and fingers you have, the larger your fingers, the larger your pick should be. Accurate pick sizes for your fingers make you comfortable while playing. Imagine someone with very large hands struggling to grab a tiny pick or someone with really small hands trying to balance a wide pick between his fingers to prevent it from falling off – that’s discomforting.

Almost all picks have the same triangular teardrop shape, but you may still find some with very weird shapes. Some picks have sharper tips or points while some have rounder tips; the rounder tips produce softer and warmer tones and actually work better for strumming while those with sharper edges produce brighter tones and work better for soloing. We also have some picks that take an entirely different shape from the regular flat surface stuff; some picks can be work around the finger or thumb, but still have a point or tip for picking, it is called a fingerpick or thumbpick.

It is such a good thing that guitar picks are not expensive so it’s easy to take your time and explore different shapes, sizes, thickness and textures until you get what you want. Also note that it is advisable to buy picks in numbers. They are small (even the so-called large ones) so it is easy for you to lose sight of them especially if your environment is rowdy. It is also advisable to get picks that are bright in colour so that you can easily locate or find them whenever they drop; darkly coloured picks are difficult and almost impossible to find.

There’s a whole world of picks out there. Have fun exploring!

Are picks your “thing”? If no, why? And if yes, which would you recommend? Please leave a reply in the comments below.