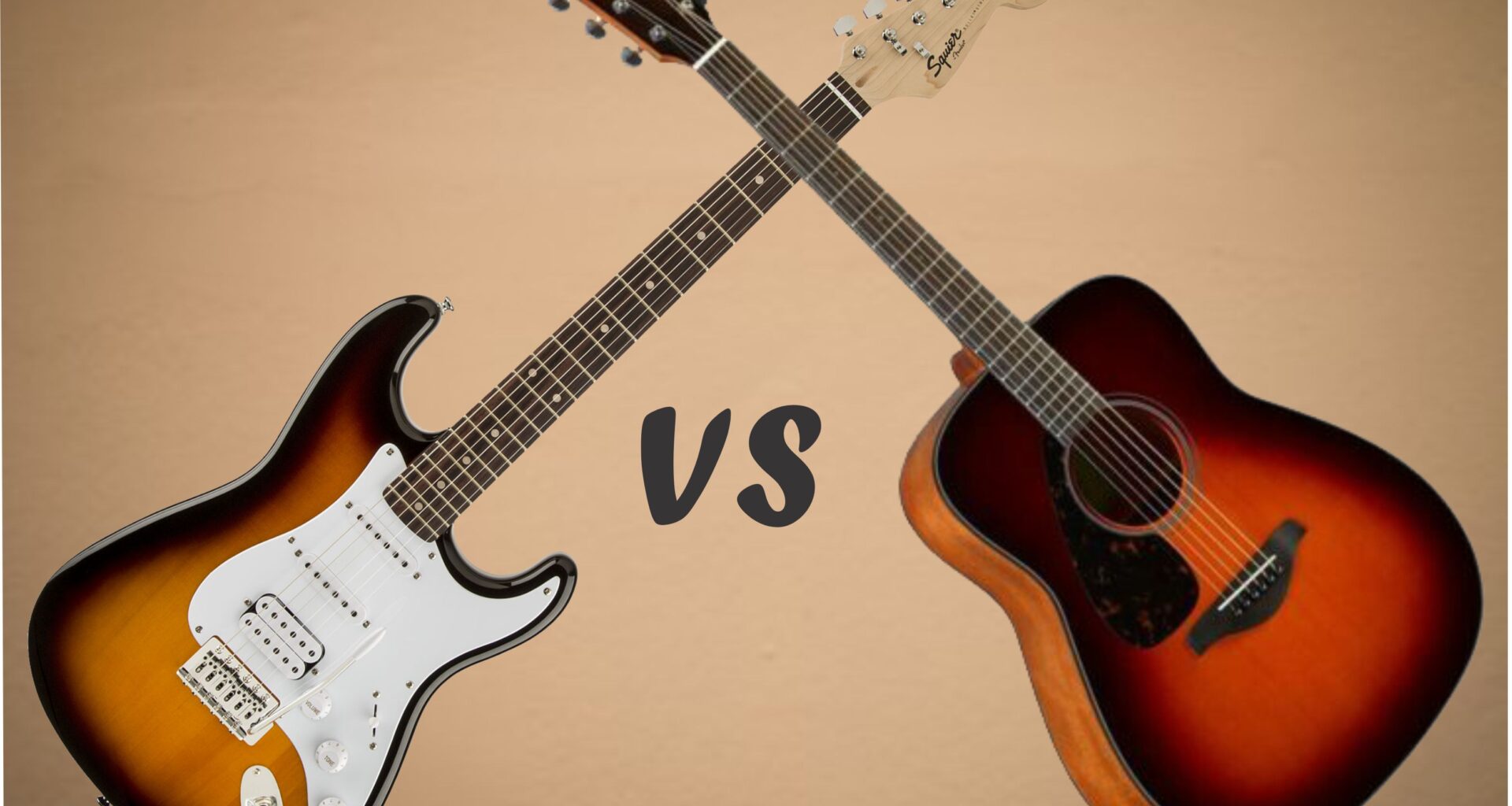 The most common question on the lips of every beginner guitarist is whether to learn how to play the guitar using the electric or the acoustic guitar. This debate has gone on for a long time and there is plenty of wrong advice especially on the internet as regards the type of guitar a beginner should learn to play with. Some online articles suggest learning with a classical guitar because it has nylon strings and feels softer on the fingers, other suggest to start with electric guitar strings which are equally softer than acoustic guitar strings, while other suggest acoustic guitar strings (the one with the toughest of strings) so that it can help toughen up your fingers and make you a “badass” as you begin your guitar journey – that’s a whole lot of confusion!

Let’s get this right and straight once and for all. As a beginner guitarist, the ease or difficulty of the strings on your fingers should not be the first determinant of the type of guitar you should buy. When considering your first guitar choice, the most important factor to think about is the style of music you want to play. If you see yourself more as a rock or punk person, then you should totally go for an electric guitar because an acoustic guitar would feel and sound terrible to play a genre of music like that. But if you’re leaning more towards country or folk music, then you should consider opting for an acoustic guitar. The entire idea is to get yourself a guitar that will suit the type of music you want to play, this will make your learning process more enjoyable for you, and when you enjoy what you’re learning, it automatically makes the process easier regardless of the toughness of the strings. Now let’s look at the major differences between an electric and acoustic guitar.

An electric guitar, though much heavier than an acoustic, has a slimmer and well contoured body which fits perfectly on your lap and around your hands, the strings are more comfortable on your fingers and are not so far away from the fretboard so you do not need so much effort to press down the strings for it to make a sound while an acoustic guitar has a big bulky hollow body and is super light, it also sits well on the lap but may be a bit of a struggle to reach the fretboard (especially for children and adults with shorter statures), the string tension is more than that of the electric guitar, this means that you’ll have to press down the strings a bit harder for the strings to properly touch the fretboard and produce sounds. The string gauge of the electric guitar is usually between 0.009 to 0.011 while that of the acoustic guitar usually varies from 0.011 to 0.014

An acoustic guitar has knobs, switches and buttons that control the sound, you need to plug the guitar into an amplifier to get the sound out of it, you will barely hear yourself if you play it without an amp and you may sound terrible even if you’re playing the correct notes, but an acoustic guitar has a hole in its face, when the strings are plucked or picked, it vibrates and the vibration moves through the saddle and bridge to the soundboard which is then amplified by the ‘hole’ in the guitar and the sound is produced loud enough to be heard. You can play an acoustic guitar and it would sound audible and great but you’ll need an amp to amplify the volume of an electric guitar (which is an extra cost). Acoustic guitars are a great option for busking as they require no extra aid to amplify their sound unlike the electric guitars. Electric guitars however, can have their volume, tone and effects controlled via the knobs on their bodies but an acoustic’s sound or effect cannot be controlled because there are no control knobs – the sound is automatically generated from the sound hole and there is no versatility of effects or tones like the electric.

Because of its lightweight, the acoustic guitar is easier to carry about, you can move it easily from place to place and can stand for long minutes and hours playing with it but the electric is usually heavier and poses some difficulty in moving it frequently from place to place or from home to studio especially if you do not have a home studio; it is also much difficult to stand for long and play with the electric guitar because it’s heavy and will wear you out sooner than you think.

Both electric and acoustic guitars basically have 6 strings so the chord patterns are the same and yes, whatever you play on one, you can also play on the other; the chord shapes, notes, strumming pattern etc. are the same on both, even though some styles of music may feel easier on one than the other. In my ow n opinion, no one is more painful than the other because at some point or the other when you are starting out to play, you’ll feel pain (this is inevitable!) but with time as your fingers mature and get stronger, these pains will ease out.

In conclusion, do not buy a guitar as a beginner based on how easy or hard it is on your fingers, you’ll get used to whatever difficulty there is over time; buy a guitar based on the style of music you want to play.

What other major differences do you know about the electric and acoustic guitars? Feel free to share your thoughts below.

Related post:
What are the different types of acoustic guitars?
How to choose your first electric guitar

Why Should You Use A Metronome When Practicing?

What Is A Guitar Pick + FAQs About Picks