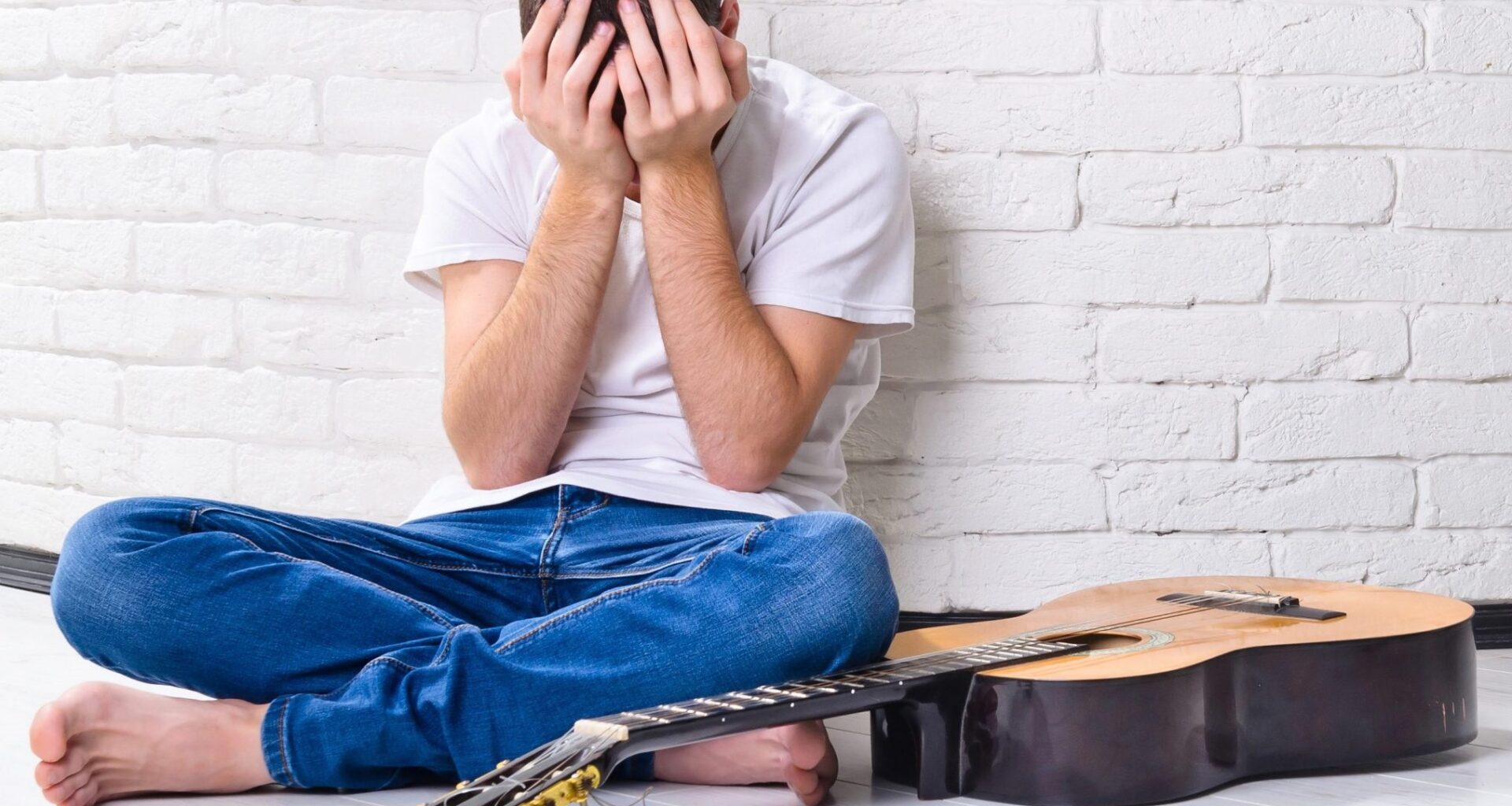 You’ve taken the boldest and most important first step which is determining to learn to play the guitar, so CONGRATULATIONS on your big decision!👏 Now you have to proceed to actually learning to play the guitar, but before you jump right into it, you need to know what mistakes to look out for and consciously avoid because too many mistakes and incorrect processes would terribly slow down your pace. If you should have learned to play basic simple songs by 3 months into playing the guitar, errors and mistakes you do not tackle or avoid now would stretch your time into 5 months…maybe more.

Let’s take a critical look at those mistakes you should avoid on your way to becoming a professional guitar player!

Not having a regular/consistent practice schedule

Everyone knows this point cannot be emphasized; don’t be tempted to practice just once a week or whenever you feel like it. It’s really not an easy routine to establish at first, but once you keep at it, it becomes a daily part of your life. This is why I always recommend putting your guitar on a guitar stand or on a wall hanger where you can easily see it and reach for it as often as you can.

Not learning the basic knowledge of the guitar

Many beginners just want to jump right into strumming chords and playing wonderful solos without getting to study and understand their instrument. Basic knowledge of the guitar such as the names of the parts of the guitar, how to tune the guitar, how to restring it, how to properly hold a pick, how to clean your guitar etc would go a long way in affecting the speed as well as the quality of  your guitar playing. Failure to learn the basics of the guitar is like building a house without knowing the materials you intend using to build.

Having too many teachers/tutors

Aha! This is where many beginners are caught red-handed especially when it concerns learning from the internet. They see an amazing guitarist and go “oooh, I wanna learn from him”, they see another one and go “aah, I wanna learn from her”. At the end of the day, they end up with too many “oohs” and “aahs” and are left utterly confused about what next to do. Sincere solution: Get one physical tutor, if you’re on a low budget or would prefer online classes, stick to one online teacher or website from start to finish.

Music theory is the fuel to the guitar playing bus. It makes your journey smooth and worthwhile, it makes playing the guitar very easy because by learning music theory, you’ll have a better theoretical understanding of music and all that’s left to do would be to apply what you’ve learned practically on the guitar and other instruments basically. There are so many benefits attached so learning music theory, see some of them here.

Having too many inconceivable fantasies

I shared a scenario I witnessed in one of my previous articles about asking two of my students what they would like to achieve at the end of a given period. One of them said he would like to gain mastery enough to play his favourite Christmas carol (and that’s okay) and the other one made the hairs on my body stand when he said he wanted to be able to play Eric Clapton’s “Eruption” by the end of the given time. Was it that I didn’t have enough faith in him? Of course I did, but let’s be frank here, he’s a beginner whom I just started teaching and we are talking about Eric Clapton here for goodness’ sake! Plus the “given time” he spoke about was 2 to 3 weeks. I mean…🤷‍♀️As much as you want to believe in yourself, don’t set up so much unachievable dreams that would disappoint you and leave you heartbroken when you don’t achieve them. It’s better to set up a small goal and surpass, than to set up an enormous goal and not make it.

Spoiling yourself with too many gear

Even if you have the resources to afford as much gear as you want, don’t do it. As a beginner, when you start learning the guitar with so many loopers, effects, reverb and delay pedals etc, you’ll get spoiled by the sound of those extra good stuff and the sound will often cover up your mistakes, and when you find yourself playing among other guitarists or playing where the kind of gear your have in your practice space is unavailable, it’s going to be very difficult for you to blend in, and you’re going to sound really off from others because you yourself wouldn’t even know what you sound like without the help of your gear.

Not recording yourself or asking others to judge your performance

From your first day of learning the music alphabets or notes on the guitar, record yourself. As you progressively grow, listening back to yourself would help you see how far you’ve come, it would also help you see where you’ve made mistakes. If you can’t recognize where you make mistakes, ask a sincere musically inclined person to listen to you while you play or listen to your recording and allow them correct you where need be.

Not practicing with a metronome

Everyone knows that practicing with a metronome helps you in the mastery of timing when playing the guitar while practicing without one makes you wobble in and out of beats all the time. Don’t be tempted to make that mistake of trying to maintain a rhythm just by tapping your feet, it’s not very accurate, use a metronome.

Failure to improve on what you’ve learned

After learning anything at all, it’s important that you ruminate on what you’ve learned and innovate a better version of it. It automatically builds up your improvisation skills and retains the muscle memory of what already exists. Do more research, try out more examples, play it over and over again in different ways, just make sure you’re furthering what you learn continuously.

Taking it all in at once

Keep calm and learn guitar. It’s a “step-by-step” process, not an “all-in-one” process. Take it one at a time, don’t bombard yourself with too many things at once. How can you be learning music theory, strumming, chord progression and barre chords all at the same time? I know it’s tempting to infuse all that knowledge into your head at once, but make no mistake, learning the guitar is not about how much you gather in at once, it’s always about assimilating knowledge and putting it into practice one at a time and consistently.

Shying away from playing before people

As a human, not just as a beginner guitarist, you’re bound to make mistakes and it takes a whole lot of boldness and courage to put your mistakes before people and let them see your “weaknesses”. This is not a very easy task to do, but it will be worth it in the end. Playing in front of familiar people will increase your courage in playing before strangers and even a larger crowd and will technically reduce your stage-fright. It will also help you improve much faster because you will do all you can to make sure you don’t repeat the same mistakes you made before. You’ll feel nervous at first, but just do it anyways!

Now that you know what not to do as you begin your guitar journey, do all you can to avoid them. Keep improving and give room to accommodate your mistakes; don’t expect perfection immediately.