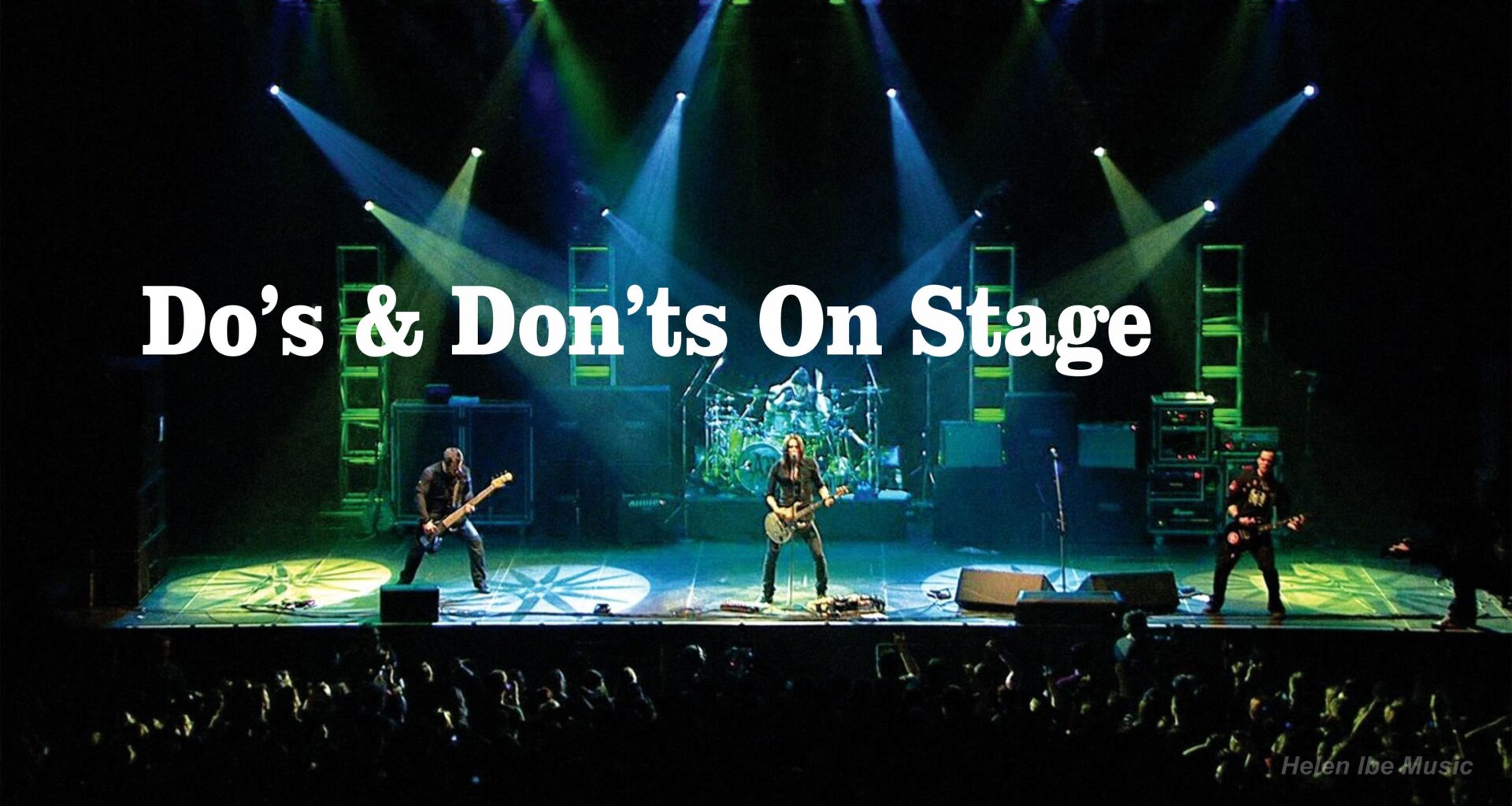 Every profession has their own performance etiquette or do’s and don’ts or general rules and guidance that one ought to follow, the music industry is no exception. These guidelines are put out there to guide us on our career growth and advancement journey; I’ll be sharing 15 of them that are meant to be adhered specifically on stage.

Never ever practice on stage, get your solos, lines or lyrics correctly before you come on stage. Even if you are doing a solo or improvising, let it be something you have already tried your hands on before. Never come on stage only to start learning something new just because you heard it somewhere before and you wanted to try it out, it doesn’t work like that. Try it out in your practice room and play it on stage like you’ve learned it.

#2.     Never tune your guitar on stage when your show has started

This just shows the crowd how unprepared you are! Tune your guitar backstage before you come up or tune it during the sound check and leave it on a guitar stand so it doesn’t get moved or tampered with. Having to leave your crowd hanging for the first 3 minutes just to watch or listen to you tune your guitar is no fun for them and is very uncourteous. You’ll kill any vibe they initially had for you and they are going to want you off that stage as soon as possible.

Never get too drunk that you cannot play your notes correctly or perform correctly. The only thing you’ll be getting from the audience that night is booing, jeering and serious mockery; an angry and unsupervised crowd may even go as far as throwing stuff at you and the event organizers will NEVER call you or your band again because you’ve already labelled your brand as BAD. No matter how excited you get, control your drinking limit until after your performance.

No matter who you are and no matter how famous you are, never arrive late to your performance and never arrive late on stage. It is rude and unpleasant to keep your audience waiting for up to 5 minutes after you have been called up stage; also note that arriving early is more for your own good and less for the good of your fans, arriving on time helps you settle in and relax long enough to gather your self-composure and confidence. Being on time makes the stage manager aware of your presence and if there is anything you need to change regarding sound or light or whatever, you can get them to do it for you early enough before your performance. Arriving late makes you get stuck with whatever is thrown at you, whether you like it or not.

#5.     Never create a scene or fight with your band members on stage

I’ve seen this happen on several occasions; no matter what happens, settle all misunderstanding offstage. The audience is there for what you are offering (the music) and not for whatever personal issues you may have with one another.

I know you’re trying to be a people-pleaser but on stage is not the best time to do that! “we want more!”, “one more song!” or “don’t go yet!” are some of the several tempting chants you’ll likely hear from fans after your performance but please, consider other performing artists that are coming after you and consider the extra amount of money the event organizers will have to pay for using extra time in that hall. If everyone was to take extra time more than what was allotted to them, nothing will make sense; do all your mind-blowing stunts and whatever tricks you have up your sleeves during your time frame. No fan will die or pass out because you didn’t play their “one more song”

In between songs or after performance is the right time to sell your merch, call out your social media handles or tell your fans where and how to reach you, but do not over do it. They came for the music, not your speech. Even when you’re trying to say something in between songs, like what the next song means to you, or the story behind how you composed the song, keep it brief. Too much talk and less music definitely bores the crowd.

An audience surely knows how to spot the difference between fake and authentic. Music is fluid. Enjoy yourself while at it. If you do not enjoy what you’re doing, how then do you expect the audience to enjoy it. Don’t be some robot who is being paid to walk in, play and walk out. Enjoy yourself while performing on stage and do not fake it. Your audience draws from your energy; it’s easier to convince them to raise their hands and get excited while you’re excited yourself, than to stand like some mannequin and yell out “can I get a whoop whoop?” it’s definitely an ass whoop you deserve (lol).

Display good stage manners; clear out your instruments quickly and orderly to allow time for another band to set up. Don’t sluggishly start rolling up your cables or meticulously packing up your gear on stage after your performance (This is not to say that you should be rough with your instruments). There is a way to be careful and still pack them quickly offstage, then you can do all your bagging and arrangement as slowly and precisely as you want. Don’t shorten the performance time of another band or musician by taking out of their time to clear out your own instruments. Clear out quickly and completely so the next performers can have enough time and space to set up.

The eyes are the doors to the soul. Your eyes communicate with your band members and the audience. Even if you’re singing or playing an emotional piece and you’re “feeling” it, like blues or jazz, don’t leave your eyes closed for too long, how else would you see through your crowd and be seen in return? How else would you know if they are enjoying your music? Even if it’s a worship concert, professionalism demands that you open your eyes every once in a while, to see what is happening around you and to communicate with those around you.

Mistakes happen. Shit happens. Brace yourself and move on. It is immature to either stare rudely at the band member who skipped a line or stop playing totally just because a mistake was made. The audience may not even notice it but when you highlight it, you make it obvious and call their attention to it, so it’s best to just cover up and carry on like nothing ever happened, except of course it’s a major issue like electrical fire or part of the stage crumbling down.

#12.     Do not forget the name of your host or your city and mention another name

This often happens to musicians who travel around the world a lot for gigs, they tend to get the names of their hosts and locations mixed up. For instance, you’re playing at a show called ‘All Things Musical’ in California and at the beginning or the end of the end of the performance, you’re giving a shoutout to ‘Music Fest Blast’ and saying “thank you Canada for having me”, your crowd will be like “what the heck just happened?” and truth be told, it’s really embarrassing. If you want to say anything, you can either say it correctly or speak in general terms without mentioning names…or say nothing at all.

#13.     Never talk ill or bad of other musicians while on stage

Yes, the music industry is highly competitive and you may have some “enemies”, but just because you are not in good terms with other bands or other musicians, that does not give you any rights to tarnish their name or image on stage just to promote yours. If you have any “beef” or bone to pick, pick it with them personally, not on stage in front of your fans, who may happen to be their own fans too. Speaking ill of others never makes you look better than them in front of your audience – it actually makes you look like a horrible person and fans hate that a lot.

#14.     Never borrow gear from other musicians

#15.     Do not scratch yourself unless it’s really one bad itch

This concerns all musicians too, but most especially singers. I attended this event and a particular band had a really awesome singer, she sang the blues and it was pure soul, I was impressed, not until she raised her leg and bent it backwards just to scratch her calf! I was dumbfounded! What had just happened?! I couldn’t get over it for a long time, and I’m pretty sure I wasn’t the only one who felt that way. Scratching yourself on stage is very distracting. If for any reason you have a terrible itch and you just have to reach it, then do it discreetly, avoid scratching your face, or arms or any other part of your body right there on stage!

#16.     Never shout or yell to closely into your microphone

No matter how excited you get with your audience, don’t yell at them directly into the mic, control your volume or signal the engineer to do that for you (if you can). Screaming or yelling at close range into the microphone is very annoying! Don’t do it!

#17.     Never fumble or make too much noise with your instruments

This is why you should never go on stage with a noisy jack or cables that squeak. If you want to plug or unplug anything at all, make sure the volume of your instrument is really at its lowest and make sure you do it carefully. The deafening sound that comes from noisy instruments or setup is very irritating and can be a turn off for your audience.

And that’s it! I hope you enjoyed reading this article as much as I enjoyed writing it?

There are so many do’s and don’ts when it comes to stage etiquette, I just brushed through a few. Feel free to share your thoughts and personal experiences on this topic in the comments below.

Don’t forget to check out other articles and share this one.

Why Every Guitarist Needs A Looper Pedal

Read More
NNews
After you have considered setting up your home studio, and writing down your budget for gear and other…
Read More
BBeginner Series
Congratulations on acquiring your new baby (I mean your guitar)! If you have not yet, but are on…
Read More
NNews
What is a metronome?A metronome is a device that produces an audible and distinct click at a regular…
Read More
NNews
What is a guitar pick? A guitar pick, also called a plectrum, is a small flat accessory which…
Read More
BBeginner Series
Become a blues guitar maestro. Find out how!
Read More
MMusic
Your guitar can sound out of tune if it is really out of tune. Ha! The most obvious…